One of the great features of Final Cut Pro X is the availability of Apple’s 64bit Logic audio processing plugins (aka Filters). In fact FCPX supports all 64bit Audio Units developed by third parties.

Let me first point out I’ve tested a fair amount of 64bit Audio Units in FCPX. Results have been mixed. Some work flawlessly. A few result in sluggish performance. Others totally crash the application. I can report that Nugen’s ISL True-Peak Limiter and Wave Arts Final Plug work very well in the FCPX environment.

Final Plug allows the operator to set a limiting Threshold as well as a Peak Ceiling. Decreasing the Threshold will result in an increase of average loudness without the audio output ever exceeding the Ceiling.

Recently Flux released a 64bit version of Elixir, their ITU/EBU compliant True-Peak Peak Limiter. Currently (at least on my MacPro) the plugin is not usable. Applying Elixir to a clip located in the FCPX storyline causes an immediate crash. I’ve reported this to the developer and have yet to hear back from them.

One recommendation that often appears on discussion forums and blogs is the use of the Logic AU Peak Limiter to boost audio loudness while maintaining brick-wall limiting. This process is especially important when a distribution outlet or broadcast facility defines a specific submission target. A few audio pro’s have taken this a step further and recommended the use of the Logic Compressor instead of the Peak Limiter. In my view both are good. However proper setup can be daunting, especially for the novice user.

These days picture editors need to know how to color correct, create effects, and handle various aspects of audio processing. If you are looking for a straight forward audio tool that will brick-wall limit and (if necessary) maximize loudness, I think I found a viable solution. 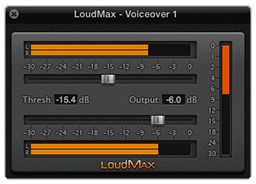 LoudMax is an easy to use Peak Limiter and Loudness Maximizer. Operators can use this plugin to drive audio levels and to set a brick-wall Output Ceiling.

The LoudMax Output Slider sets the output Ceiling. So if you are operating in the “just to be safe mode”, or if you need to limit output based on a target spec., set this accordingly. If you need to increase the average loudness of a clip – decrease the Threshold setting until you reach the desired level. The Output Ceiling will remain intact.

LoudMax also includes a useful Gain Reduction Meter. If viewing this meter is not important to you – there’s no need to run the plugin GUI. The Threshold and Output parameters are available as sliders, much the same as any other FCPX Filter or Template. You can also set parameter Keyframes and save slider settings as Presets.

Using the Logic Peak Limiter and/or Compressor is definitely a viable option. Keep in mind that achieving acceptable results takes practice. Proper usage does require a bit more ingenuity due to the complexity of the settings. I’ll be addressing the concepts of audio dynamics Compression in the future. For now I urge you to take a look at LoudMax. It’s 32/64bit and available in both VST and AU formats. The AU Version works fine in FCPX. I found the processed audio results to be perfectly acceptable.

At the time of this writing LoudMax is available as Freeware.