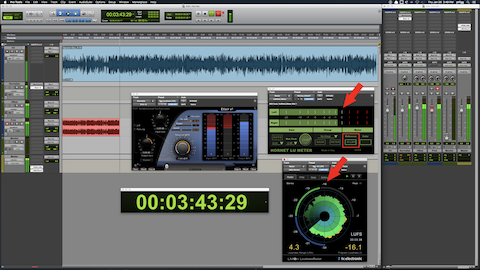 It is also possible to measure and display Integrated/Program Loudness as Loudness Units (or LU’s) on a Relative Scale where 1LU == 1 dB.

When shifting to a Relative Scale, the 0 LU increment is always equivalent to the Meter’s user defined or spec. defined Absolute Loudness target.

For example, in an R128 -23.0 LUFS Absolute Scale workflow, setting the Meter to display a Relative Scale changes the target to 0 LU.

Likewise if the Meter’s Absolute Scale target is set to -16.0 LUFS, it will correlate to 0 LU on a Relative Scale. Again both would reflect perceptual equivalence.

All broadcast delivery specifications suggest Absolute Scale Integrated Loudness targets. However, for any number of subjective reasons – many operators prefer to use the alternative Relative Scale and “mix or master to 0 LU.”

Please note Loudness Units are also the proper way in which to describe Loudness differentials between two programs. For instance, “Program (A) is +2 LU louder than Program (B).” One might also describe gain offsets in LU’s as opposed to dB’s.

The Meter is indeed nifty and affordable. However there is one sort of caveat worth noting: As the name suggests, it is an LU Meter. In essence Integrated (Momentary) Loudness measurements are solely displayed on a Relative Scale.

The displayed Session (image) consists of a single mono VO clip. The objective is to print a processed stereo version in RT checking in at -16.0 LUFS with a maximum True Peak no higher than -2.0 dBTP.

I’ve inserted a Compressor and a Limiter on the Normalize Auxiliary Input track. The processed audio is passing through at -19.0 LUFS (mono).

The audio is then routed to a second (now stereo) Auxiliary Input track titled Offset. I use the track fader to apply a +3 dB gain offset, This will reconstitute the loss of gain that occurs on center panned mono tracks. The attenuation is a direct result of the Pro Tools Pan Depth setting.

The signal flow/output is now passing -16.0 LUFS audio. It is routed to a standard audio track titled Print. When this track is armed to record, it is possible to initiate a realtime bounce of the processed/routed audio.

Notice the instances of the Hornet LU Meter and TC Electronics Loudness Radar. Both Meters are inserted on the Master Bus and are measuring the session’s Master Output.

Conversely the TC Electronic Meter is configured to display Absolute Scale measurements. The circular LED that borders the Radar area indicates Momentary Loudness. The defined Integrated Loudness target is displayed under the arrow at the 12 o’clock position.

I will say if you are comfortable monitoring real time Momentary Loudness and understand Relative/Absolute Scale correlation, the Hornet tool is quite useful. In fact it contains additional features such as Grouping, auto/manual Gain Compensation, and auto-Maximum Peak protection.

Additional insight on the K-weighting Curve or K-weighted filtering:

K-weighting suggests de-emphasized low frequencies by way of a high-pass filter. A high-shelving filter is applied to the upper frequency range, and the measured data is averaged.

TC Electronic describes applied K-weighting on audio channels as a “method to build a bridge between subjective impression and objective measurement.”