In the recent article published on Current.org “Working Group Nears Standard for Audio Levels in PRSS Content”, the author states:

“Working group members believe that one solution may lie in promoting the use of Loudness Meters, which offer more precision by measuring audio levels numerically. Most shows are now mixed using peak meters, which are less exact.”

Peak Meters are exact – when they are used to display what they are designed to measure:Sample Peak Amplitude. They do not display an accurate representation of average, perceived loudness over time. They should only be used to monitor and ultimately prevent overload (clipping).

It’s great that the people in Public Radio are finally addressing distribution Loudness consistency and compliance. My hope is their initiative will carry over into their podcast distribution models. In my view before any success is achieved, a full understanding of all spec. descriptors and targets would be essential. I’m referring to Program (Integrated) Loudness, Short Term Loudness, Momentary Loudness, Loudness Range, and True Peak.

A Loudness Meter will display all delivery specification descriptors numerically and graphically. Meter descriptors will update in real time as audio passes through the meter.

All Loudness standardization guidelines specify a Program Loudness or “Integrated Loudness” target. This time scaled descriptor indicates the average, perceived loudness of an entire segment or program from start to finish. It is displayed on an Absolute scale in LUFS (Loudness Units relative to Full Scale), or LKFS (Loudness Units K Weighted relative to Full Scale). Both are basically the same. LUFS is utilized in the EBU R128 spec. and LKFS is utilized in the ATSC A/85 spec. What is important is that a Loudness Meter can display Program Loudness in either LUFS or LKFS.

The Loudness Range (LRA) descriptor can be associated with dynamic range and/or loudness distribution. It is the difference between average soft and average loud parts of an audio segment or program. This useful indicator can help operators decide whether dynamic range compression is necessary.

The specification Gate (G10) function temporarily pauses loudness measurements when the signal drops below a relative threshold, thus allowing only prominent foreground sound to be measured. The relative threshold is -10 LU below ungated LUFS. Momentary and Short Term measurements are not gated. There is also a -70 LUFS Absolute Gate that will force metering to ignore extreme low level noise.

There is also a Relative scale that displays LU’s, or Loudness Units. A Relative LU scale corresponds to an Absolute LUFS/LKFS scale, where 0 LU would equal the specified Absolute target. In practice, -23 LUFS in EBU R128 is equal to 0 LU. For Podcast/Mobile -16.0 LUFS would also be equal to 0 LU. Note that the operator would need to set the proper Program Loudness target in the Meter’s Preferences in order to conform. 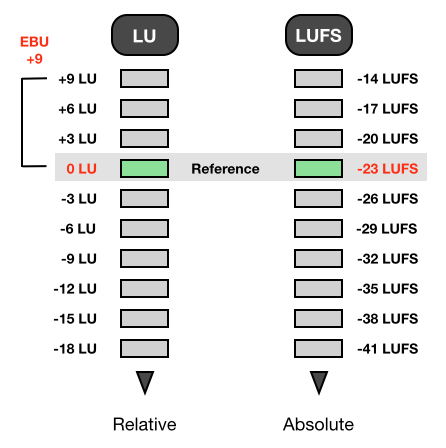 1 LU is equal to 1 dB. So for example you may have measured two programs: Program A checks in at -20 LUFS. Program B checks in at -15 LUFS. In this case program B is +5 LU louder than Program A.

Loudness Meter plugins mainly support online (Real Time) measurement of an audio signal. For an accurate measurement of Program Loudness of a clip or mixed segment the meter must be inserted in the DAW at the very end of a processing chain, preferably on the Master channel. If the inserts on the Master channel are post fader, any change in level using the Master Fader will result in a global gain offset to the entire mix. The meter would then (over time) display the altered Program Loudness.

If your DAW totally lacks inserts on the Master channel, Buses would need to be used accordingly. Setup and routing would depend on whether the buses are pre or post fader.

Some Loudness Meter plugins are capable of performing offline measurements in certain DAW’s on selected regions and/or clips. In Pro Tools this would be an Audio Suite process. You can also accomplish this in Logic Pro X by initiating and completing an offline bounce through a Loudness Meter.