Here is a glimpse of what I have planned for the next release of aspectRatio: 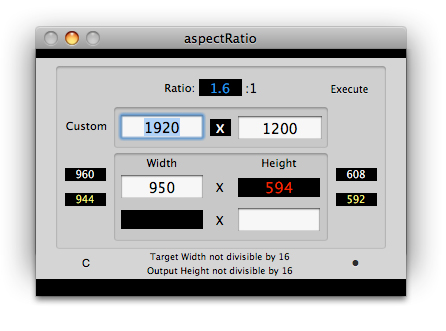 At this point I’ve implemented a suggested dimensions method that displays values evenly divisible by 16. The results are triggered by the Target Width and returned Output Height calculation.

Select MPEG formats are based on 16×16 macro-blocks. Evenly divisible (by 16) output dimensions will maximize the efficiency of the encoder and yield optimum results. For example: a purist would prefer a small 16:9 distribution video to be 480×272 instead of the common 480×270

Also included in this release: a user defined output font color preference setting [orange/red], and a Menu option that re-opens the main UI window if the user inadvertently closes it while the application is still running.

A release date has yet to be determined …